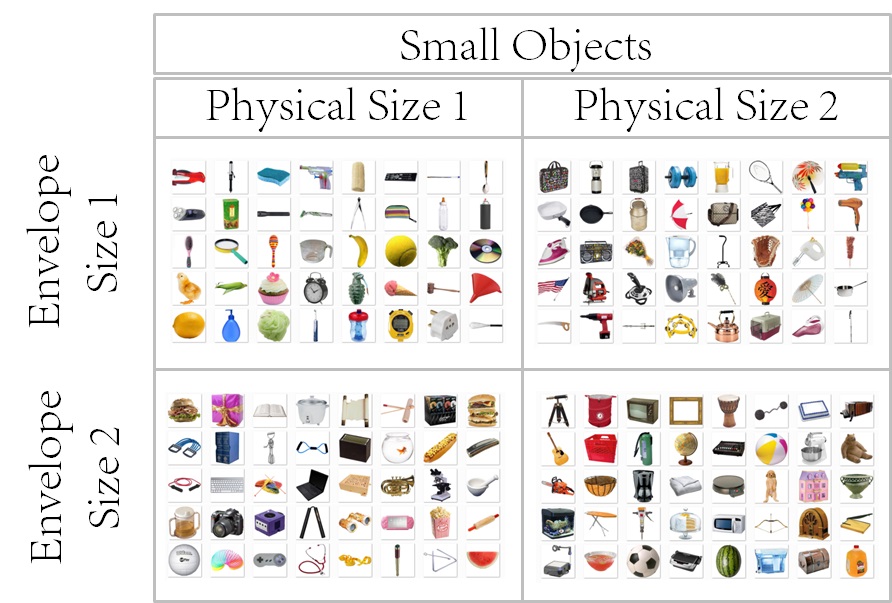 This project introduces the novel perceptual property of interaction envelope, the space through which a user transverses to interact with an object. In this paper, we operationalize it as the number of hands most often used to interact with an object, as it is easily quantifiable and delineates two very different, non-overlapping volumes of interactive space. We hypothesize that scene-selective regions in the brain are sensitive to local spatial information of a wider variety of stimuli than previously believed (not only scenes, but also small objects). In the above paper, we show that these regions indeed have sensitivity to interaction space, dissociable from other object properties shown to modulate activity in scene-selective regions, such as physical size.

Here, we have made publicly available stimuli from the experiment so you can run your own experiments on interaction envelope or other object properties. Stimuli are all .JPGs and stimulus properties are both available as .XLS or .CSV.

July 3, 2019 Updated publications. Also starting to recruit for my new lab to start at University of Chicago in January!!

May 16, 2017 Added example psychophysical scripts for free use

September 9, 2016 Updated my site to reflect my institute change!

October 6, 2014 Updated publications, CV, and bio. Got some poster awards!

April 18, 2014 Updated publications and added a program for easily making image sets from the Face Database

January 14, 2014 Updated publications and the 10k US Adults Face database! Get it while it's fresh!

March 31, 2011 Updated bio and publications list (decided on a grad school and got three more papers in!)

May 24, 2010 All graduated! Updated profile and CV information

November 9, 2009 Uploaded the Japanese version of this site, and made minor edits.

November 4, 2009 Little tweaks made to the site. The Japanese version will be uploaded in the next couple of days!